Why the attempt at suppressing the reward of dispossessing oneself (i.e., “Interest”) failed... and where has that money gone.

It sometimes happens. You are tired, distracted, scared, nauseous.... and that's when it hits you, a different way of looking at things, some vantage point on reality you hadn't found before. A bit like being the point man of a patrol in enemy territory.

In my case, the “Enemy territory” have been the financial markets. Mainly because of this: 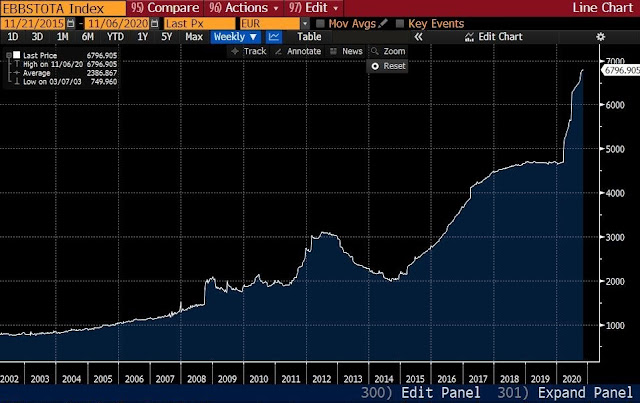 Now all that Central bank liquidity, like a Tsunami hitting a shore, has wreaked havoc on price discovery which is (was, actually) the basis of the accumulation of wealth since time immemorial. Just to do a quick "back of the terracotta tablet" recap on why I think what's happening is way off the reservation, here is how I would explain “interest” to a very young niece at a wedding reception, where there is neither time nor Laptops to go bonkers with Math.

Imagine, if you will, that you are in possession of a rather large sum of money, a sum which is large enough to surpass your foreseeable needs for years. As long as that sum is in your safe, you can freely dispose of it in any way you see fit: buy new clothes, a new car, buy your dream cottage in the countryside and live off the land, etc. Cash on hand is the ultimate optionality: it can transform itself (and you) into any things that it's conceivably traded or exchanged... even a new passport, if you like Cyprus (poking someone? Of course).

So, it is quite reasonable to surmise that after these last six rows lines on a page, any reasonable person would think that he would part with freedom of disposing of that sum only under one or more of these conditions:

Just to clarify further: if you think I am wrong, and “markets” *cough* are PROVING me wrong, you must accept that you stand by the opinion that a rational person should have a positive utility from PAYING something in order to lose availability of his savings over time.

Bluntly said, he must rationally accept the following contract:

In even simpler terms, a low risk tolerance saver with a bit over 100k Euros is predicted to prefer such a losing bet to (COVID permitting) a reasonably expensive weekend in Paris with a loved one... Just don't tell my wife. She doesn't speak English anyway, so if you don't talk I most certainly won't.

Now, do you think that contract above is possible or not? Would you accept it? Would you trust someone that would, to be in charge of your savings?

First one is easy: yes, hence the strange end date: 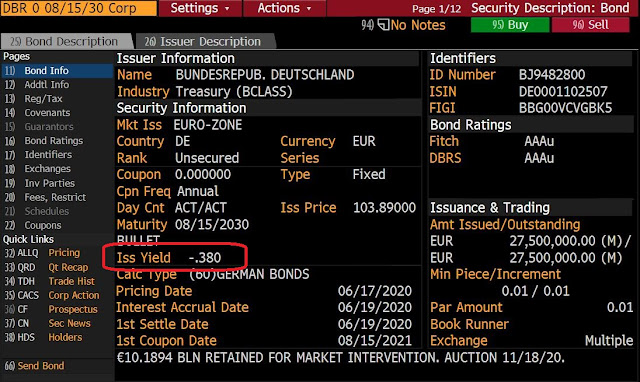 For the second, by all means, I am slightly more libertarian than Professor Bernardo de la Paz (look it up).

As to the third, apparently savers say an emphatic YES!

The amount of bonds with negative yields has been Zero for 3.000 years of interest rates, but now it skyrocketed. 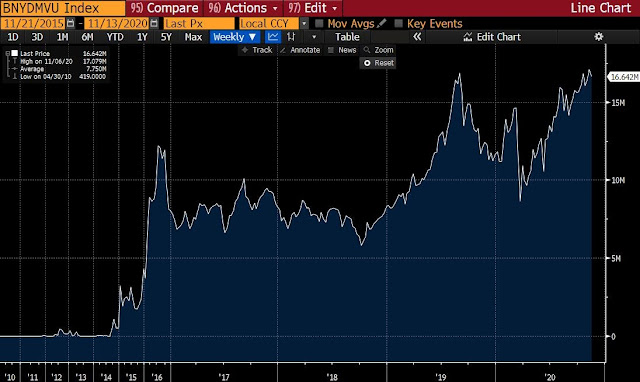 Yet, this seemingly doesn't faze Central Bankers. They are very much into “Climate Risk”, slightly less into “We'd better set money markets straight before someone comes to chop out heads!”. Why?

Of course, the headlong rush by central banks to push down yields favors debtors, but especially the biggest ones: Governments. That's where my daily nightmares helped... in imagining a dystopian parallel reality.

In this mirror world, rates never breach Bagehot's1 idea that rates should never be set by the central bank lower than 2%; rather, the Government simply sets a withholding tax on rates, which currently would be set on that ten year Bund at about 130% of the coupon. That issue currently yields minus 0.58%, from which : 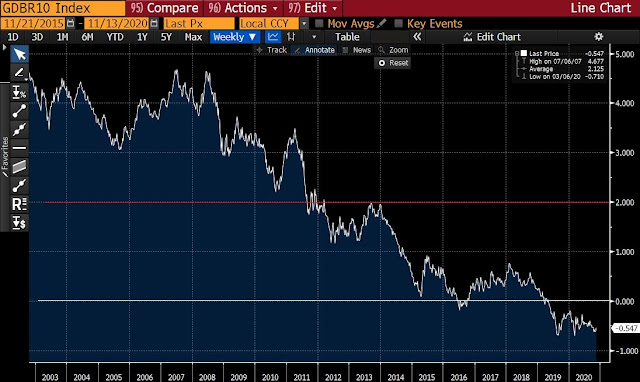 Of course, the nature of money being what it is, such a tax would have generated an incredible diversity of loopholes, exempt entities, favored investments, etc. etc., with the added complication that you wouldn't have been able to enforce a similar system on Equity / Private equity / Real Estate investments. So, our world is more “Elegant”: EVERY asset class is “taxed”, exactly like a making tide lifts all boats, from the sleekest yacht to the most ungainly barge. Of course, it also wets parts of the environment unsuited for such a humid environment, nonetheless.... We can put a conservative estimate in.

From the Graph above we can see that one estimate of negative yielding bonds is now at 16642 Billion USD. Let's surmise that in the other universe, those securities would yield 2%, and let's charitably say that the average negative yield on those securities is zero. That would put the amount of this “Central Bank Tax” at 330 Bn USD, or approximately 280 bn EUR per year.

Now you see my wry smile when I saw the figures of the Recovery Fund... To my small mind, Central Bankers have enacted EVERY YEAR a fiscal transfer from savers to debtors bigger that the whole of the Recovery Fund, with no awareness of the people involved or any political scrutiny. Politicians are of course quite happy with that: those kind of windfalls have NEVER happened in the history of mankind. Of course, this also impacts on what kind of politicians you have, and what they are inclined to do (i.e., anything).

I don't want to delve in the “It would have been better or worse” discussions, especially since it's totally immaterial: the glass vase is broken in tiny pieces, and I am unwilling and unable to put it back together. But I am slightly miffed that monetary and financial authorities are fixated on odds and ends outside their specific purview, like “Climate”, “Social justice” et al., without feeling in the least compelled to open an honest discussion on what going back to positive interest rates would entail.

Because, Ladies and Gentlemen, make no mistake: negative interest rates, if you accept my three points above, do not exist in Nature. They are THEIR construct, and in the boondocks from where I come from, “you break it, you own it.

Popular posts from this blog

OUR DARKEST HOUR - Why the COVID scare is a pale cardboard cut-out of the coming moment of truth for governments and the economies.

October 10, 2020
OUR DARKEST HOUR Why the COVID scare is a pale cardboard cut-out of the coming moment of truth for governments and the economies. I understand. It's an immediate peril over which individuals have no control. These kind of crisis are the REAL “suspension of disbelief”, since the value of cooperation, however imperfect, is now much higher than “freedom”. That's where all the extraordinary measures limiting people come from. However, we should not forget a number of problems, some about the past, and some about the future. In reality, the problems of the past are two: One, we had SARS in 2003 1 ; Yet, no one so far has done an After Action Report on the inadequacy of the plans about pandemic defence, plans for which all countries set up between 2004 and 2007 2 . Just to put my two cents in: When lock-down was enacted, the general population had no clues about how to act in a lock-down, what kind of medical and non medical supplies one should stock at home, what
Read more

NEVER do an after action report

NEVER do an after action report   How on Earth did we end up with negative rates? Simple, by avoiding as much as possible any “wargaming” of economic predicaments.   Thanks to a friend, Marc Udeschini,  for starting my down this rabbit hole. He asked: " Is a period of hot inflation the likely path forward?". That got me thinking, not so much about the future as about  the past.  After all, one of the high point in my life was meeting a person who was a "high priest" in insurance since the 60ies. I won't name him because he passed away and he was quite prominent, but after the meeting we talked a little, liked each other's way of thinking, and started REALLY talking. at some point, I asked him "Why do life policies carry a 4% minimum guaranteed return?". He told me that prior to the Yom Kippur oil crisis and the resulting inflation explosion, Insurance companies merely gathered assets by offering a fixed 4% return  against their name. Fast forwar
Read more

Giovanni B. Ponzetto
I am an Italian who could not for family reasons leave when he could and should, and now I will ride the beast to the bitter end. This Blog is an outlet for what could have been a paradise and it's turning into something very different.